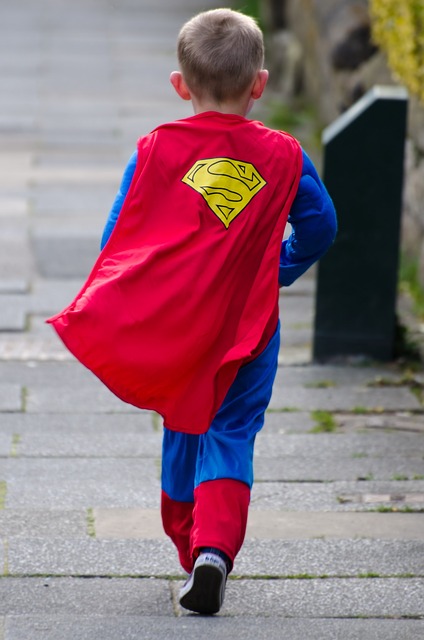 KaBam! Pow! His bright red cape, flapping in the wind as he runs to rescue a baby duckling from crossing the road. “Don’t worry mommy, I’ll save her!” my three-year-old son imagines while pretending to fly. He scoops up a yellow stuffed duck and throws it in the air.

Superheroes are all exciting and fun unless you have a child that actually, believes that he’s got superhuman strength and can fly. It turns out, he doesn’t, and he’s learning the hard way.

A loud scream is coming from my son’s bedroom. He’s supposed to be napping. Guess that didn’t work out too well. I swing open his door and find him stuck in his rocking chair. It’s flipped over, with his little body wedged in between the foot-rest and the underside of the seat. How in the world did this happen?

“I was trying to be like Mr. Incredible when he gets stuck in his belt and uses his super strength to bust out,” he cries.

Right. Mommy needs to use her superhuman strength to wiggle him from the destructive jaws of the great wooden monster. At last, he’s free.

Climbing the wooden ladder to the top of the playset, he stands tall and mighty. Can you guess what super boy is about to do? Thank goodness his handy dandy sidekick mommy is there to the rescue. Without time to throw on her spandex leotard, a ghastly sight anyway, she hurls herself forward just in time to catch the Superboy as his magical flying powers dissipate into thin air.

“That was cool!” he laughs.

Unfortunately,  sidekick mommy is busy hyperventilating and overcoming her near heart attack to take part in his excitement.

Through deep breaths, she manages to say, “Don’t. Ever. Do. That. Again.”

We’re standing in line at the grocery store when he gets the urge to be a superhero again. Great, I’m thinking. This outing is not the place for that.

Shoo! Shoo! Using his fists, he begins throwing laser beams to any unknown creature in his path.

Shoo! Shoo! His arms were flying forward. Eyes narrowed, and with a scrunched nose, he flings another beam. Except this was a big one. Standing in front of us was an older lady. I’m not one to judge, but she looks like she eats kids for breakfast. Not exactly the person you’d want to throw supersonic laser beams toward.

With a light laugh and nervous smile, I say, “Sorry. My son thinks he’s a superhero.”

Hmmph, she grunts and turns around. I’m sensing danger, and my son’s villain detector has gone off. He pulls a Buzz Lightyear and crouches down with one arm back, and the other shooting forward. I look down just in time to see the destruction that is about to unravel. We’re talking unleashing all his powers to capture the evil villain kind of beam.

Shoo, shoo, shoo, shoo! We’re under attack! Laser beams are flying everywhere, the child-eating lady in front of us nearly jumps out of her nylon circulation stockings, when I do the unthinkable. I use my body as a shield to stop the blasts and get a hold of Captain Crazy Pants before we get kicked off this planet, in other words, out of the neighborhood grocery store.

“I’m so sorry,” are the only words I can get out of my mouth to save us from this embarrassing situation we’ve found ourselves in.

Thank goodness for the older man chuckling behind me who apparently watched the whole showdown.

I pass the apologetic look onto him, and he says, “I have three boys, and from what I can tell, those were some pretty good repulsor rays.”

We both laughed, and somehow we managed to get through the rest of the line without further attacks.

While I admire my son’s determination to save us commoners from the daily evil-doers of this world, we need to teach our invincible thinking Superboy that danger doesn’t always lurk around the corner. He doesn’t have to hang up his cape and get back to the daily grind of being a three-year-old but instead considers using his mighty superpowers to find the sock eating villain that lives in my dryer.